Geeze said:
After looking about and spending some time meditating on the porcelain throne the slot needs to be a chevron at 31° in keeping with the design
Click to expand...

I like this idea (and that's the best place for ideas)

Both drilled and cut 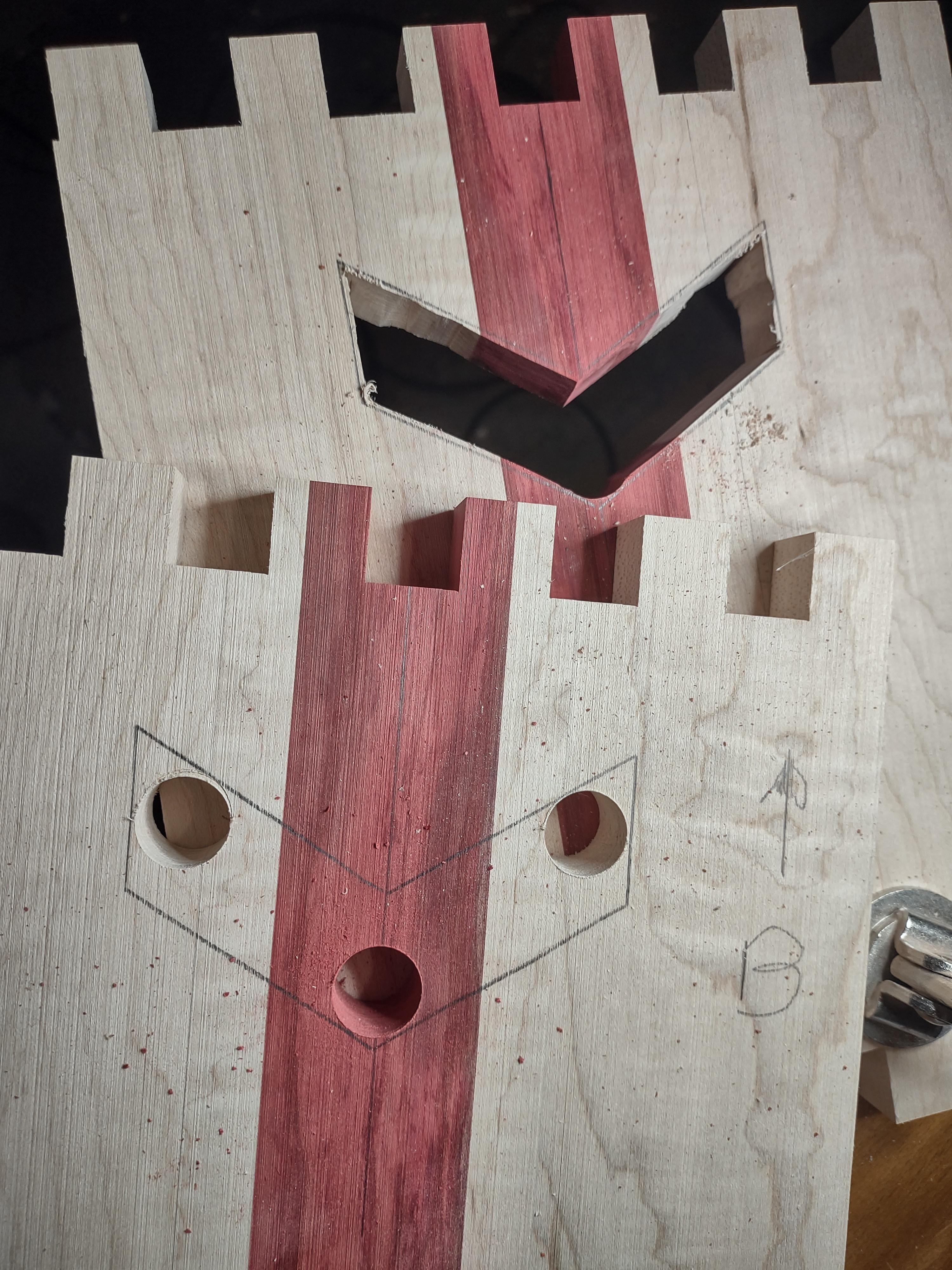 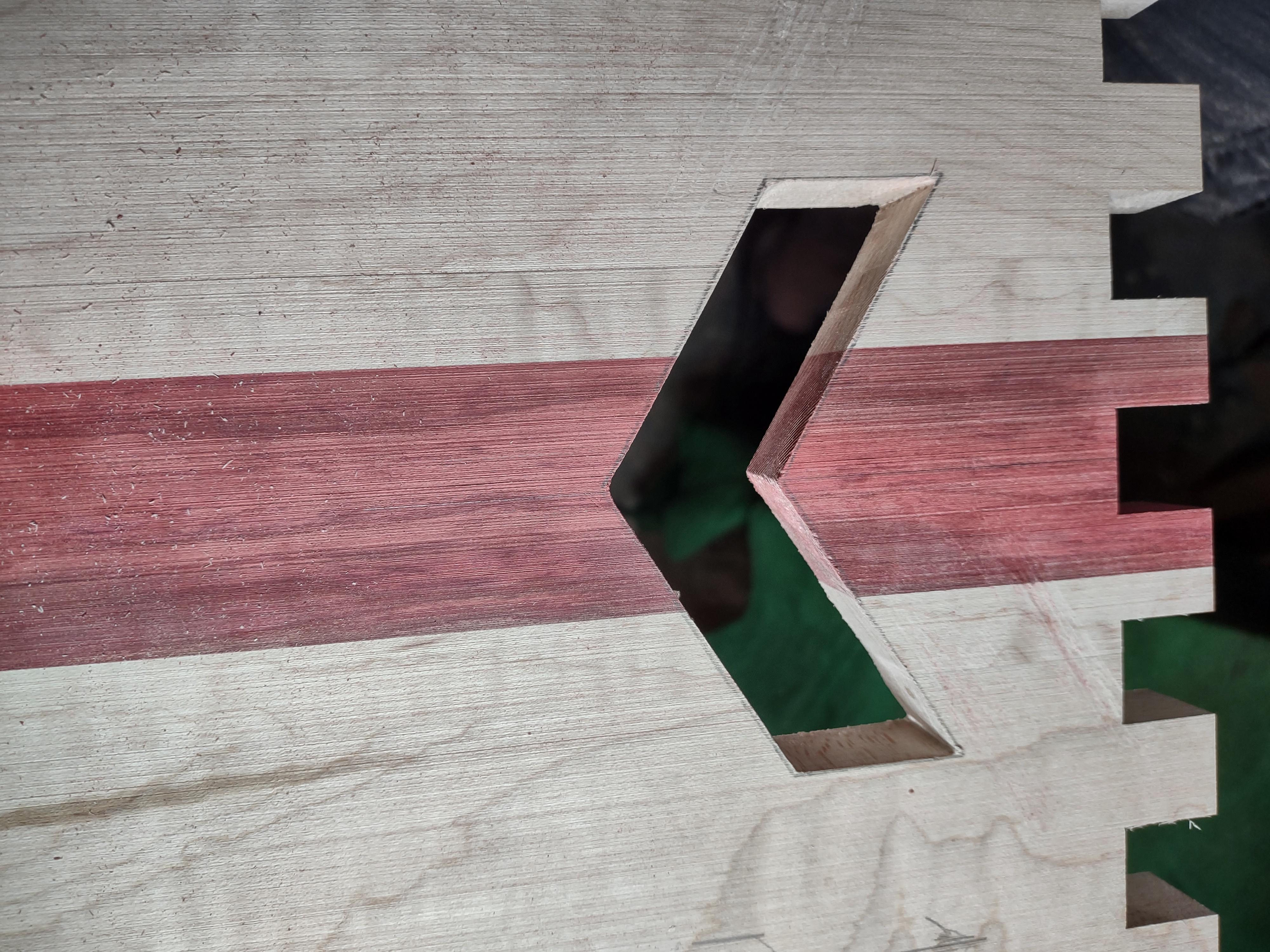 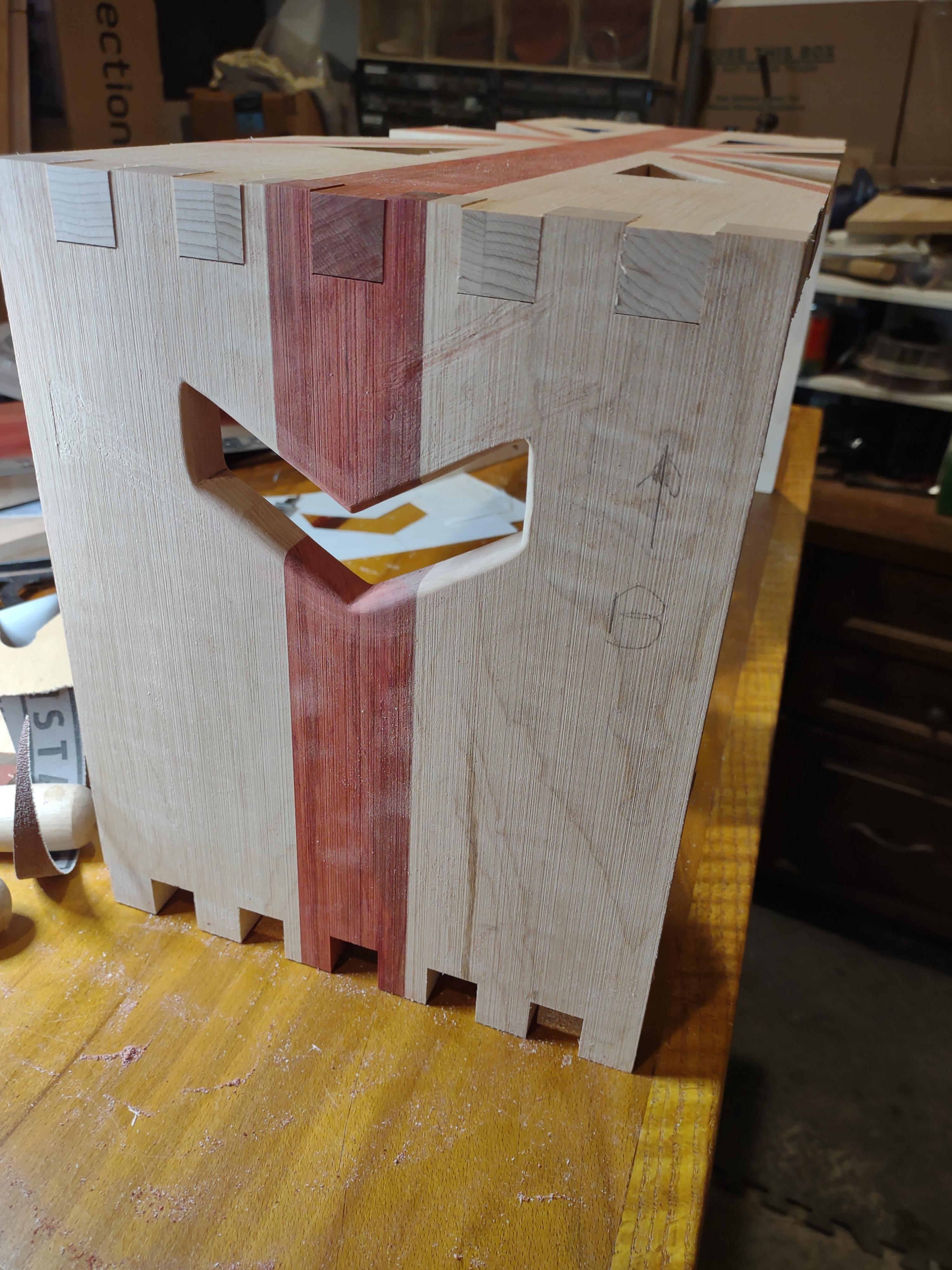 Not sure I like it but it was the best compromise vs. no handle.

Geeze said:
Not sure I like it but it was the best compromise vs. no handle.
Click to expand...

I think it looks cool, and it looks better than bolt-on components on this cab
Last edited: Jul 2, 2022

Geeze said:
Not sure I like it but it was the best compromise vs. no handle.
Click to expand...

I think it looks better than just a slot - and indescribably better than a bolt-on aftermarket handle.
Functionality with style.
Once there's an amp in there and it's closed up, it'll just be a shadow in the pattern.

Sanded everything but the finger joint areas with 60 grit to get rid of the drum sander lines. Glue up has commenced. 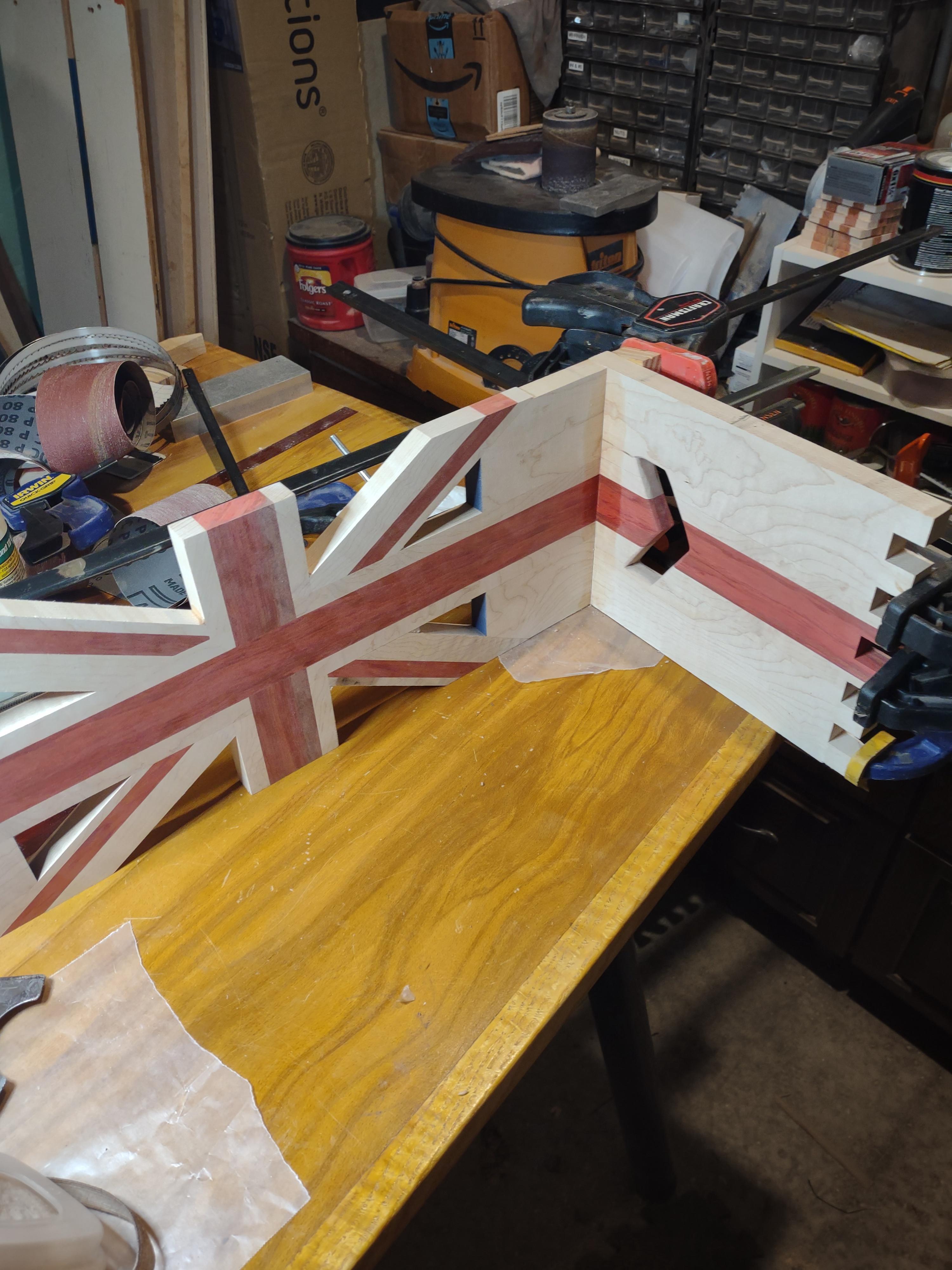 Before I glued on the bottom bits, I sealed the center stripes and diagonals as I plan to dye the appropriate inside parts blue - don't know how well it will work but we shall see. 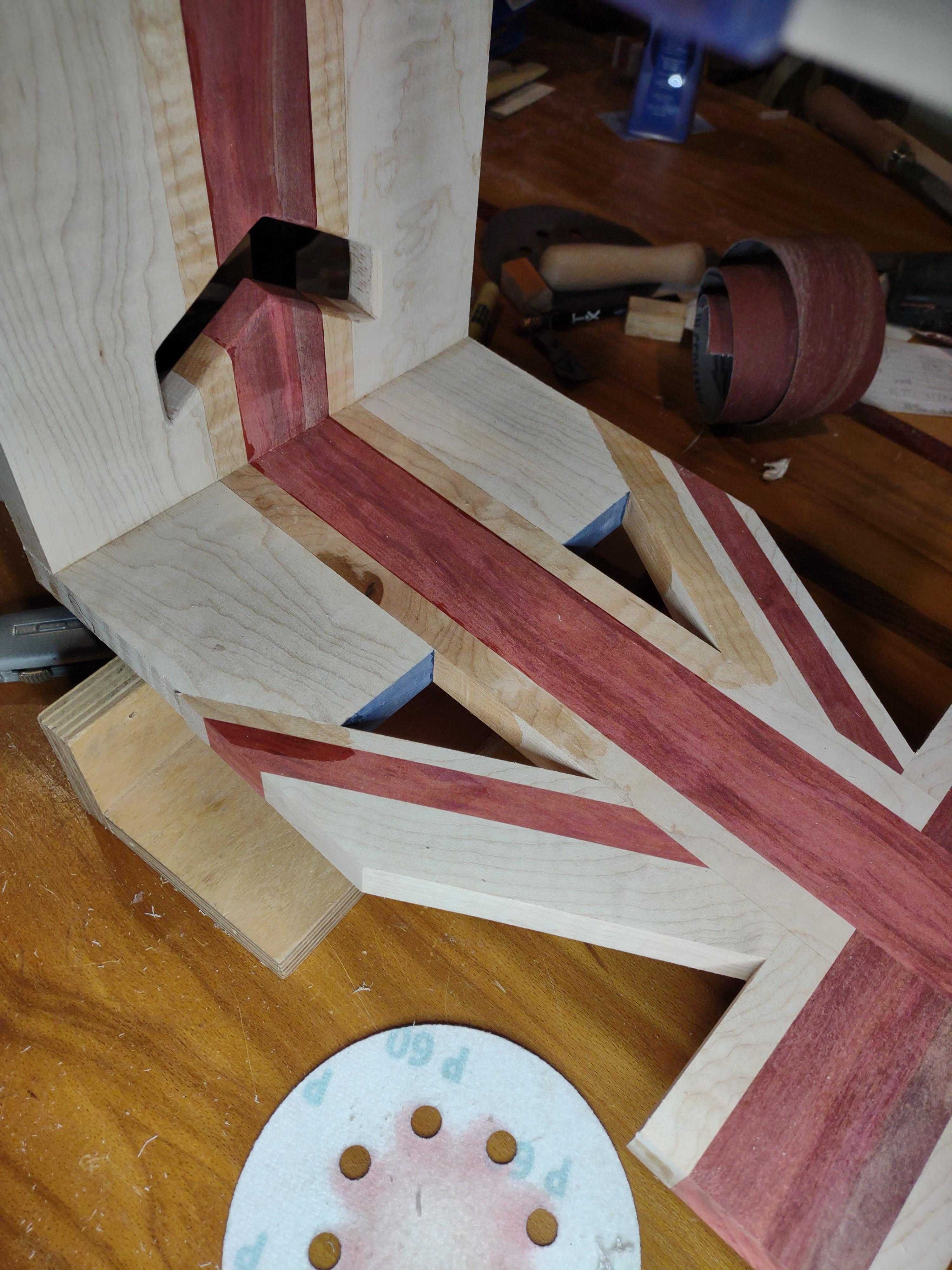 After the bottom parts were glued, I noticed an oops that required a .075" strip to fill in. 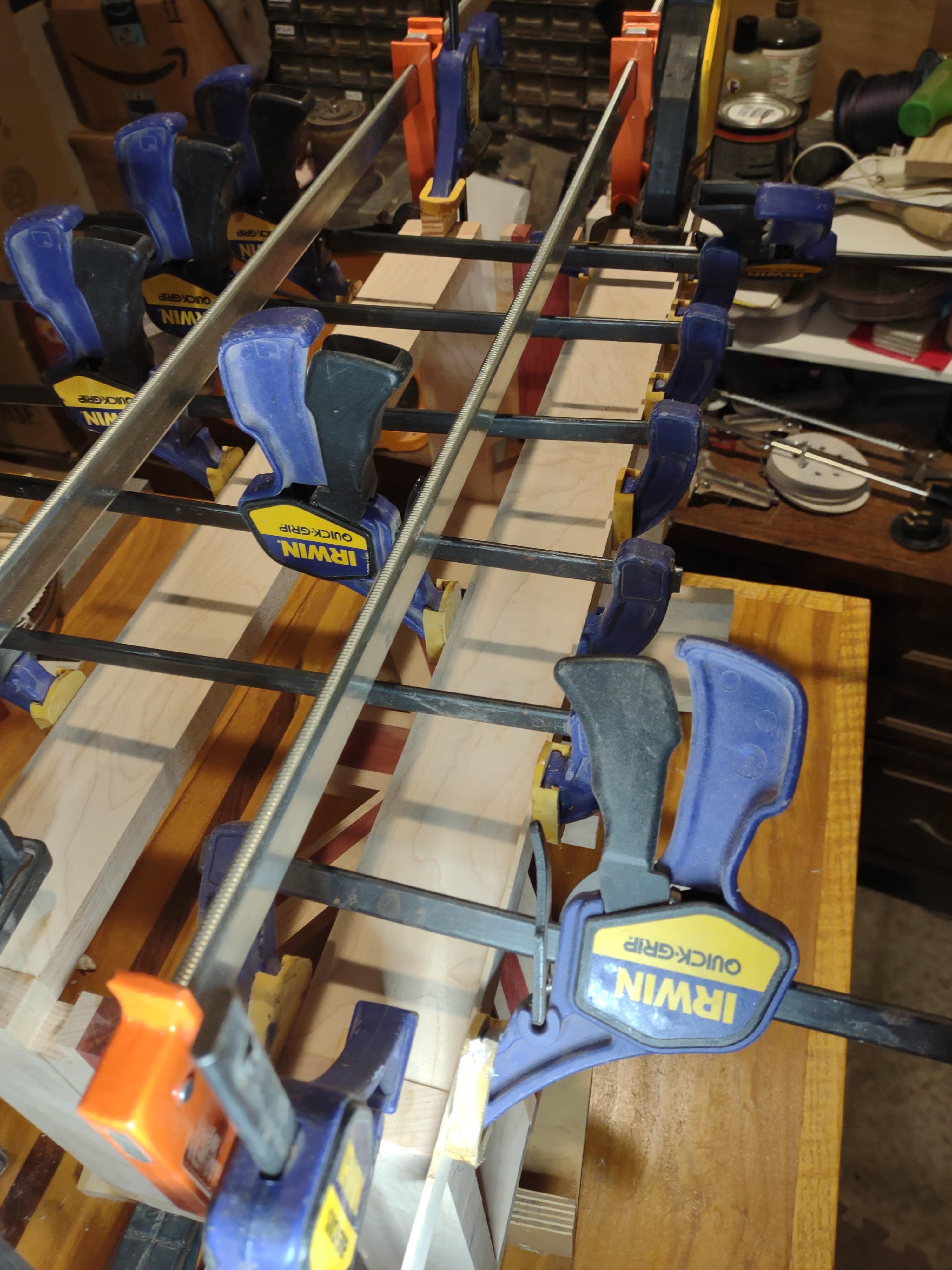 That's all for today. I plan to do some fitting of the rest of the bottom, the fake fingers then sanding. 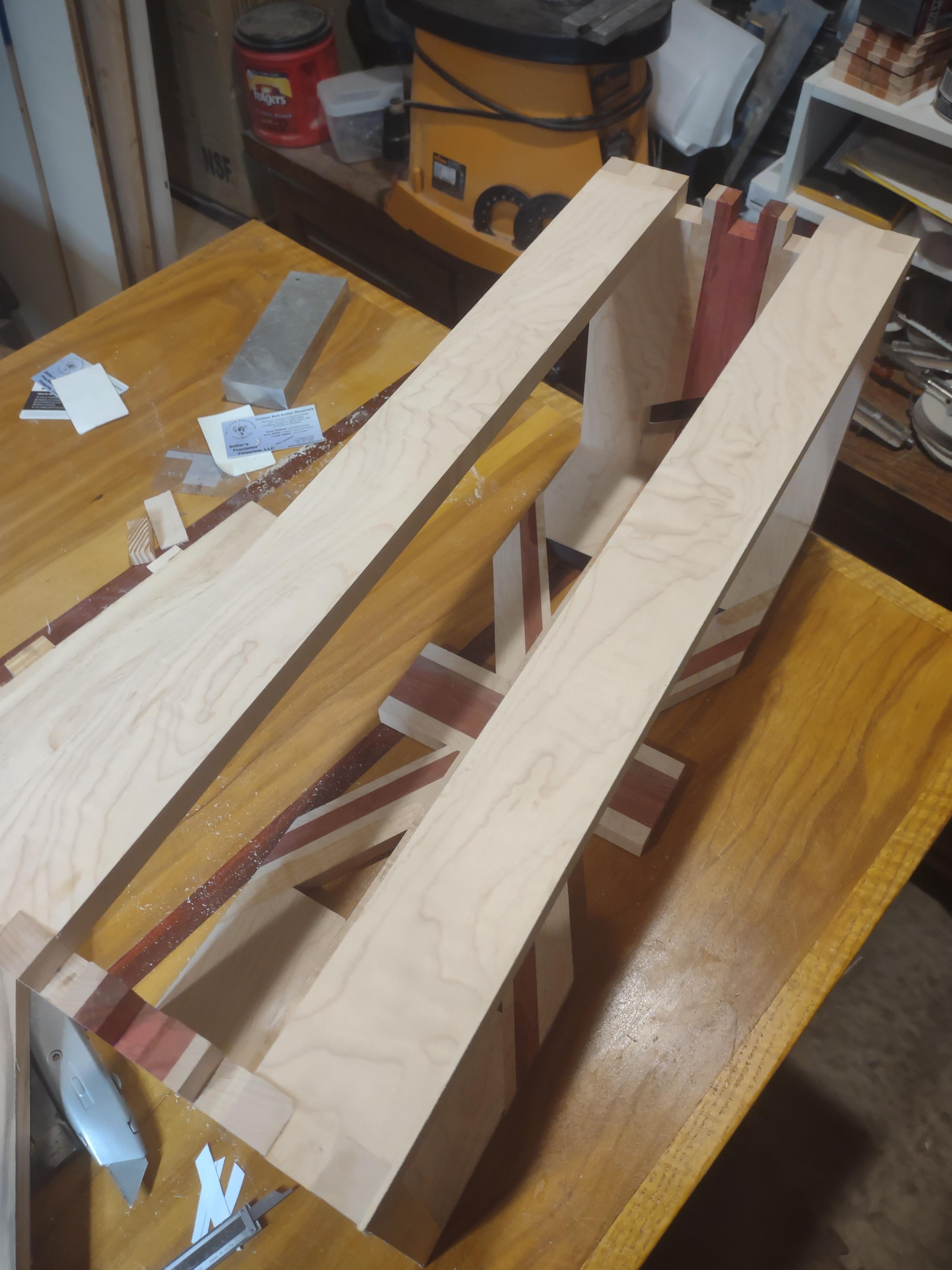 Now for the center piece and the fake fingers. 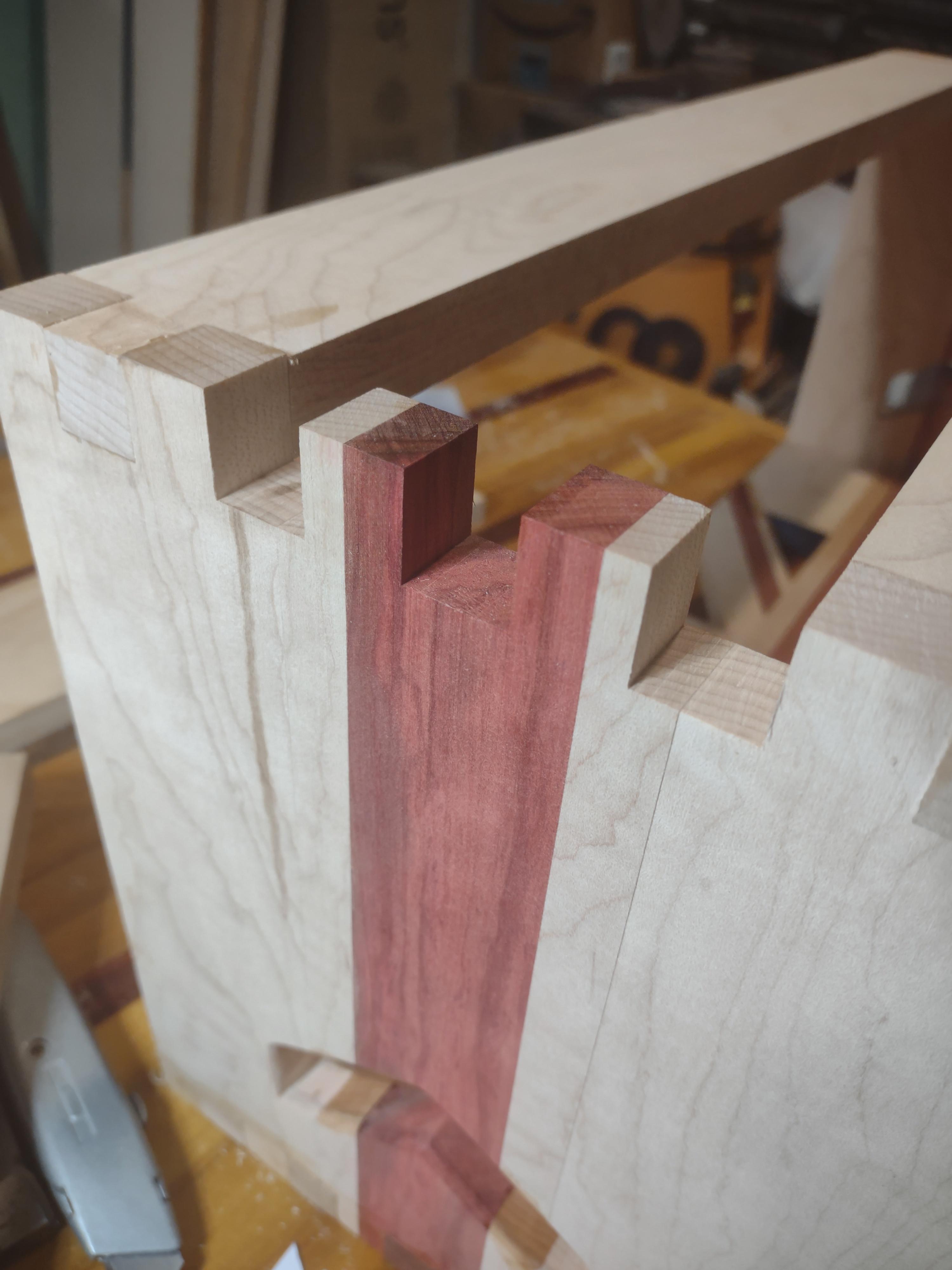 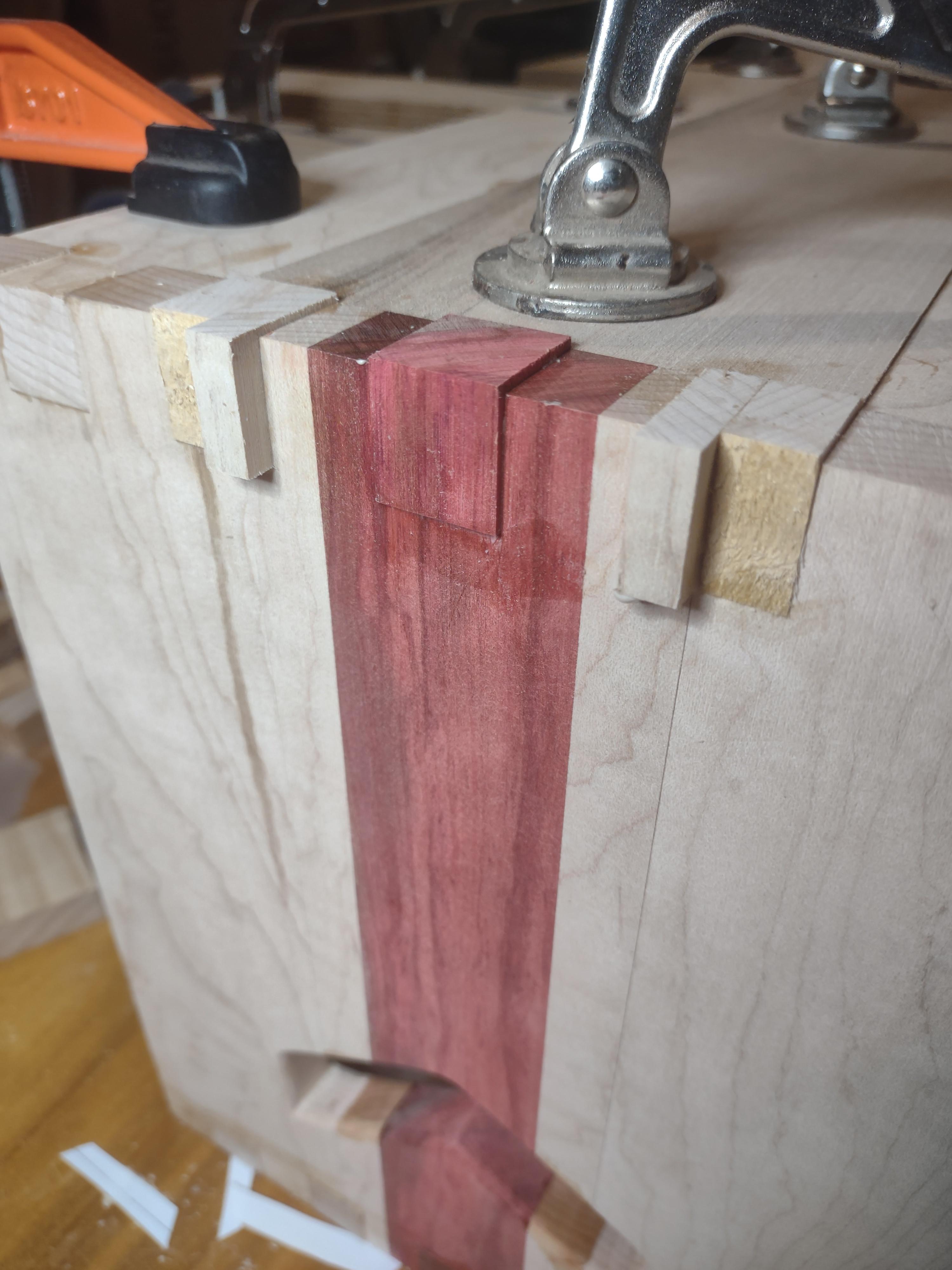 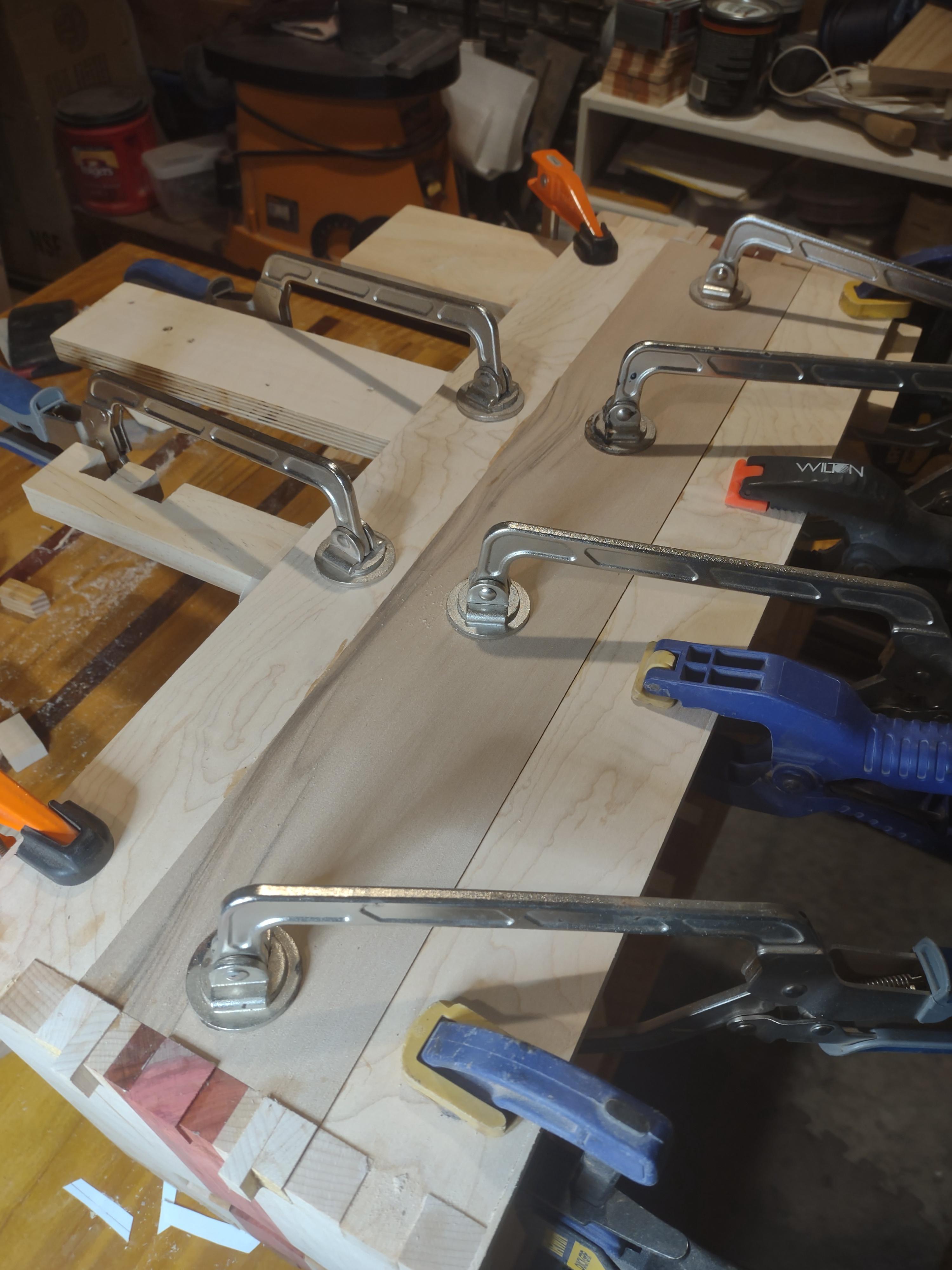 Geeze said:
Both drilled and cut

Not sure I like it but it was the best compromise vs. no handle.

Thats gonna be uncomfortable to grab, I would have gone with the ovals.

pedecamp said:
Thats gonna be uncomfortable to grab, I would have gone with the ovals.
Click to expand...

I actually mocked one up and clamped it in a 60lb mill vise - it wasn't bad. I did have to make the height .125" bigger as one of my knuckles touched the lower side.

Not as involved as your’s, but my tribute to Pete’s early cab 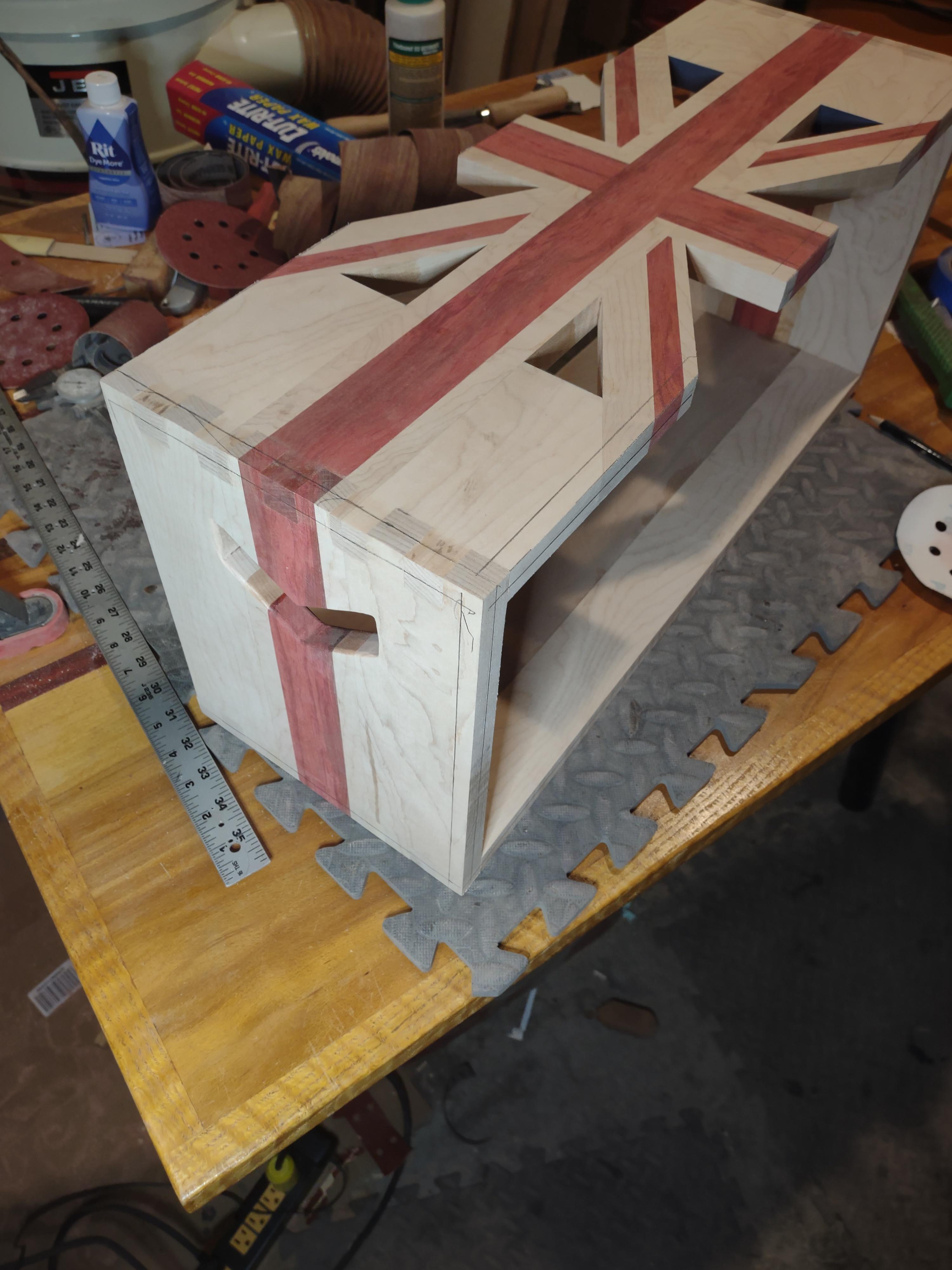 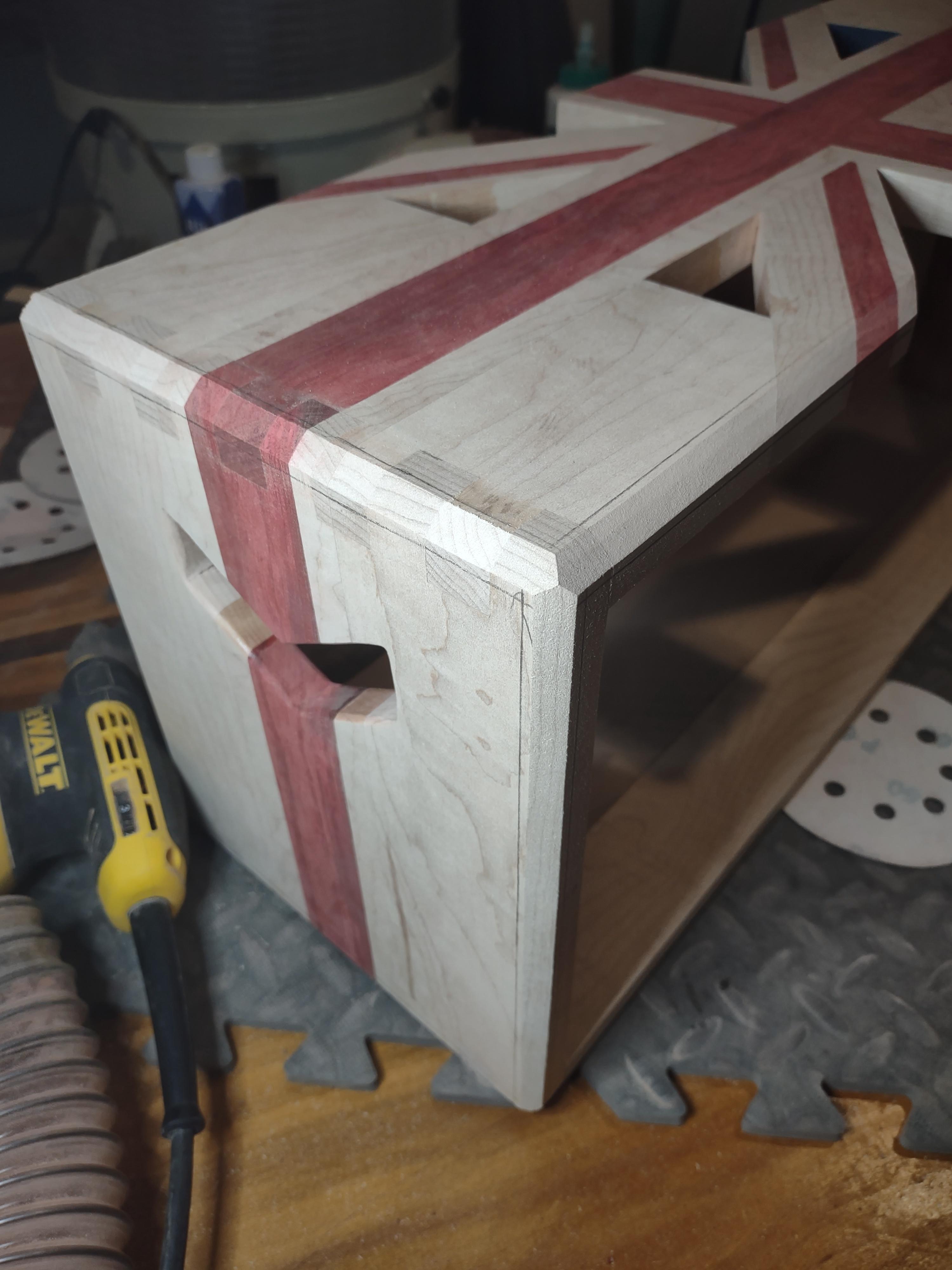 Face plate in work. I hadn't planned on any blue bits on the front but the naked reality of amp chassis and mounting hardware changed my mind. 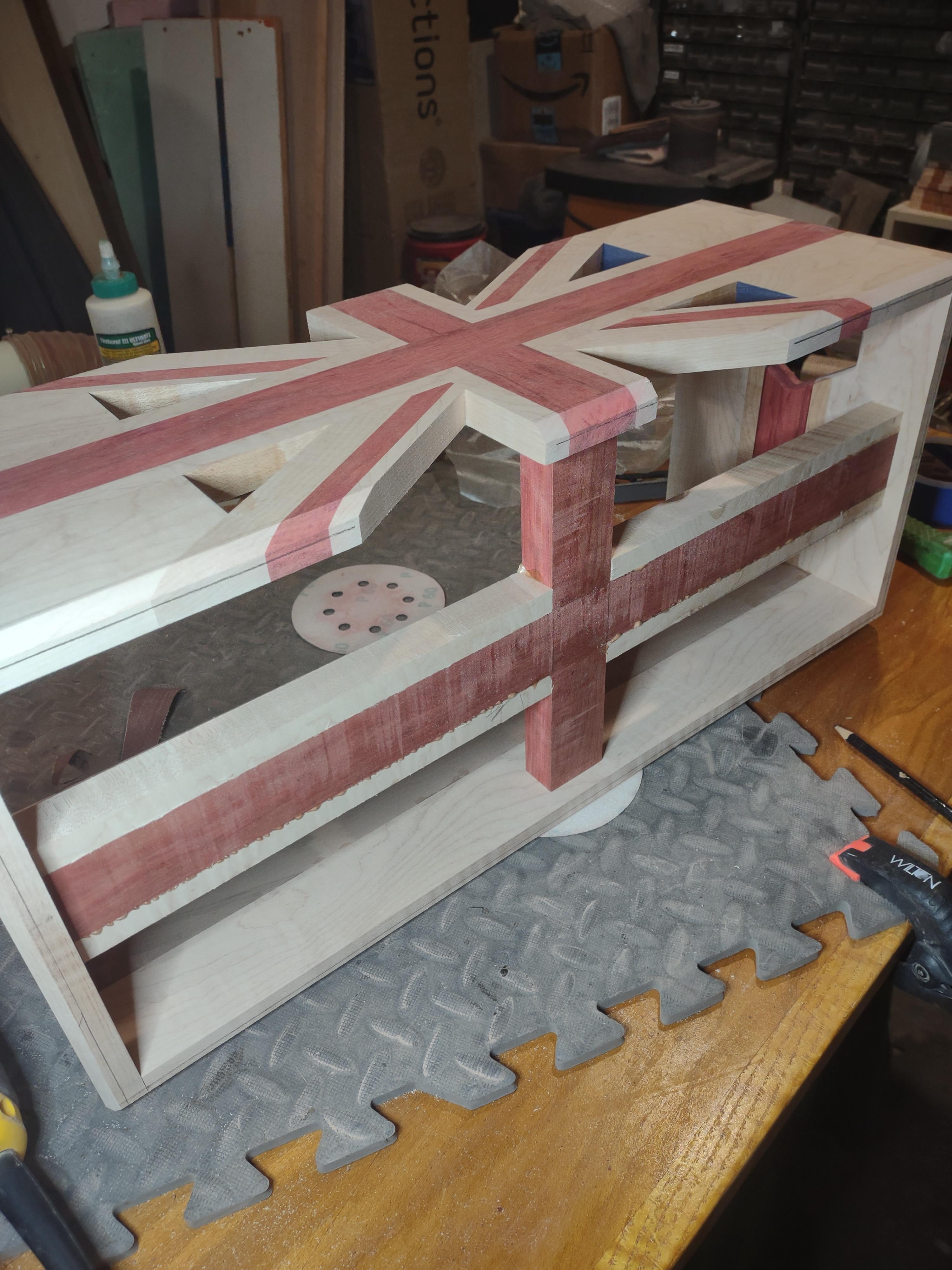 Most of the bottom will be cut off for the control slot but on the upside I don't have to cut additional cooling vents.

Go Loud Early said:
Not as involved as your’s, but my tribute to Pete’s early cab
Click to expand...

No image - would love to see it!

I tend to go full stupid on builds as its a 3D puzzle I get to design and then figure out how to build. I haven't had to burn one yet... 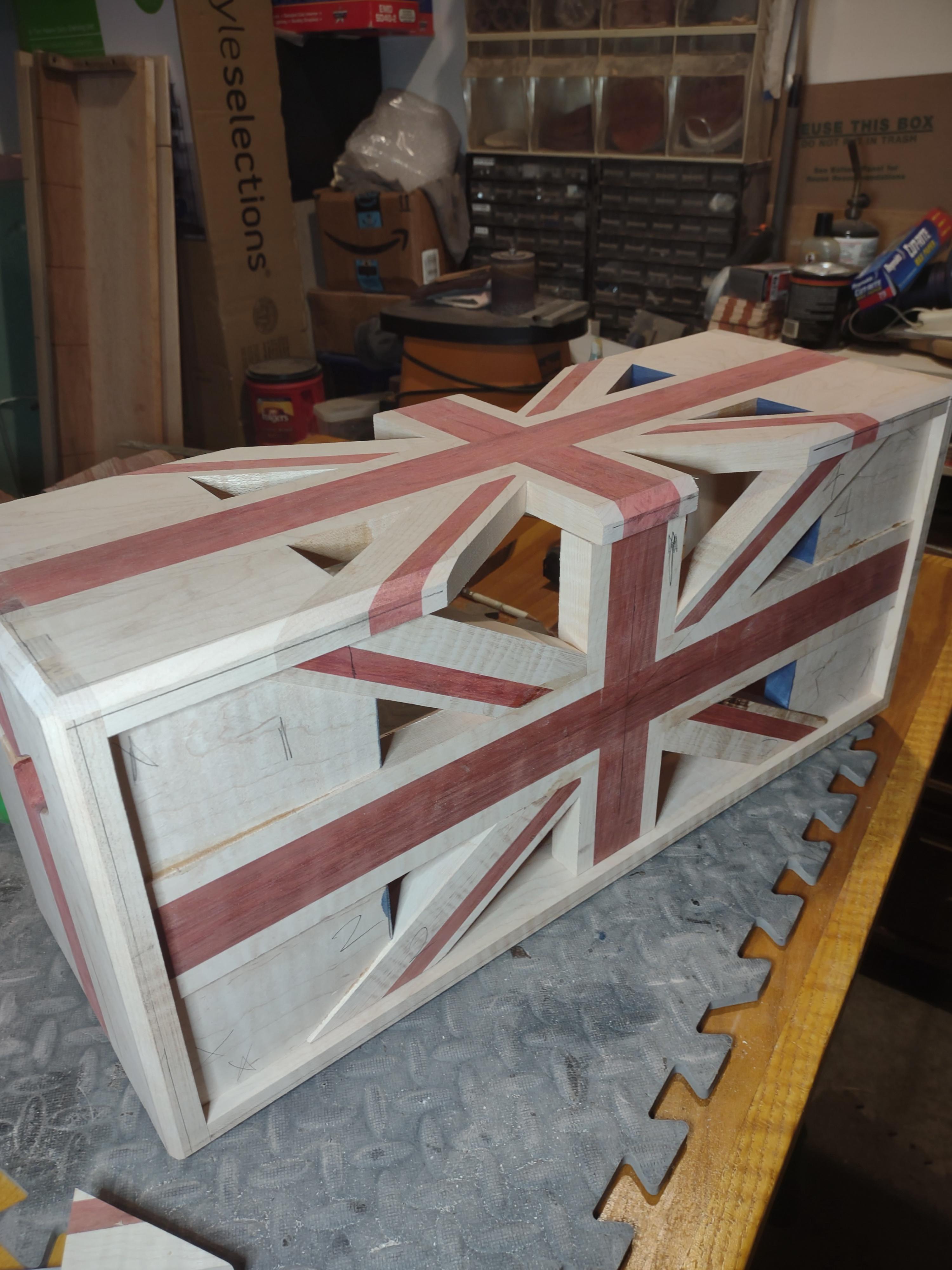 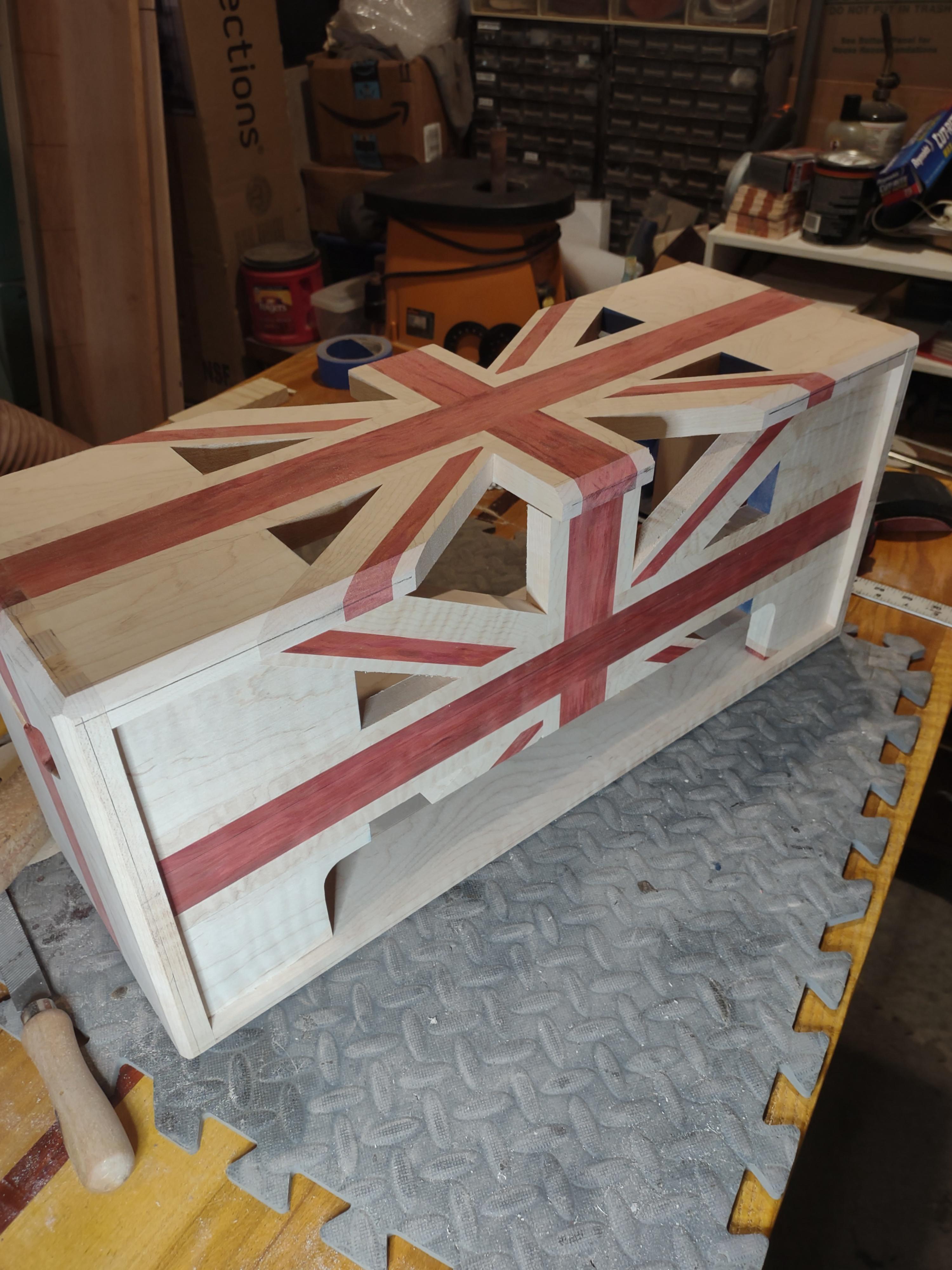 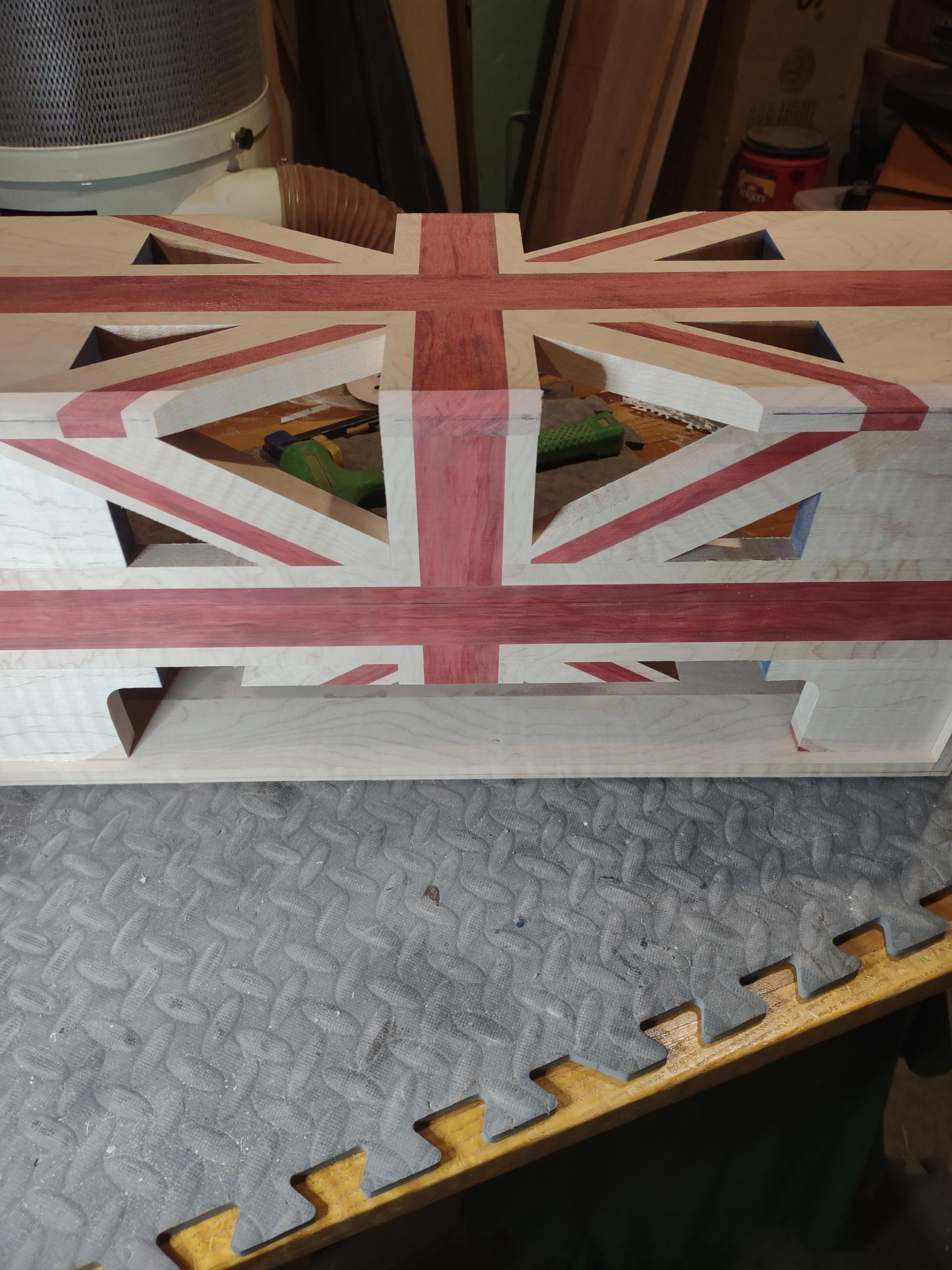 Enough for today. More sanding and some voids filled.

I smile every time I think about building a union jack cab on July 4.

This is by far the most interesting thread at the moment. Looks stunning so far. Can‘t wait to see the final result.

faerdi said:
This is by far the most interesting thread at the moment. Looks stunning so far. Can‘t wait to see the final result.
Click to expand...

Then I realized while looking at other cab builds - no piping on faceplate! To be continued...

I had a couple of unhappy bits on two of the diagonals and trimming for piping eliminated both - happy! Another unsung hero in my shop is a 'shooting' board used to straighten edges. 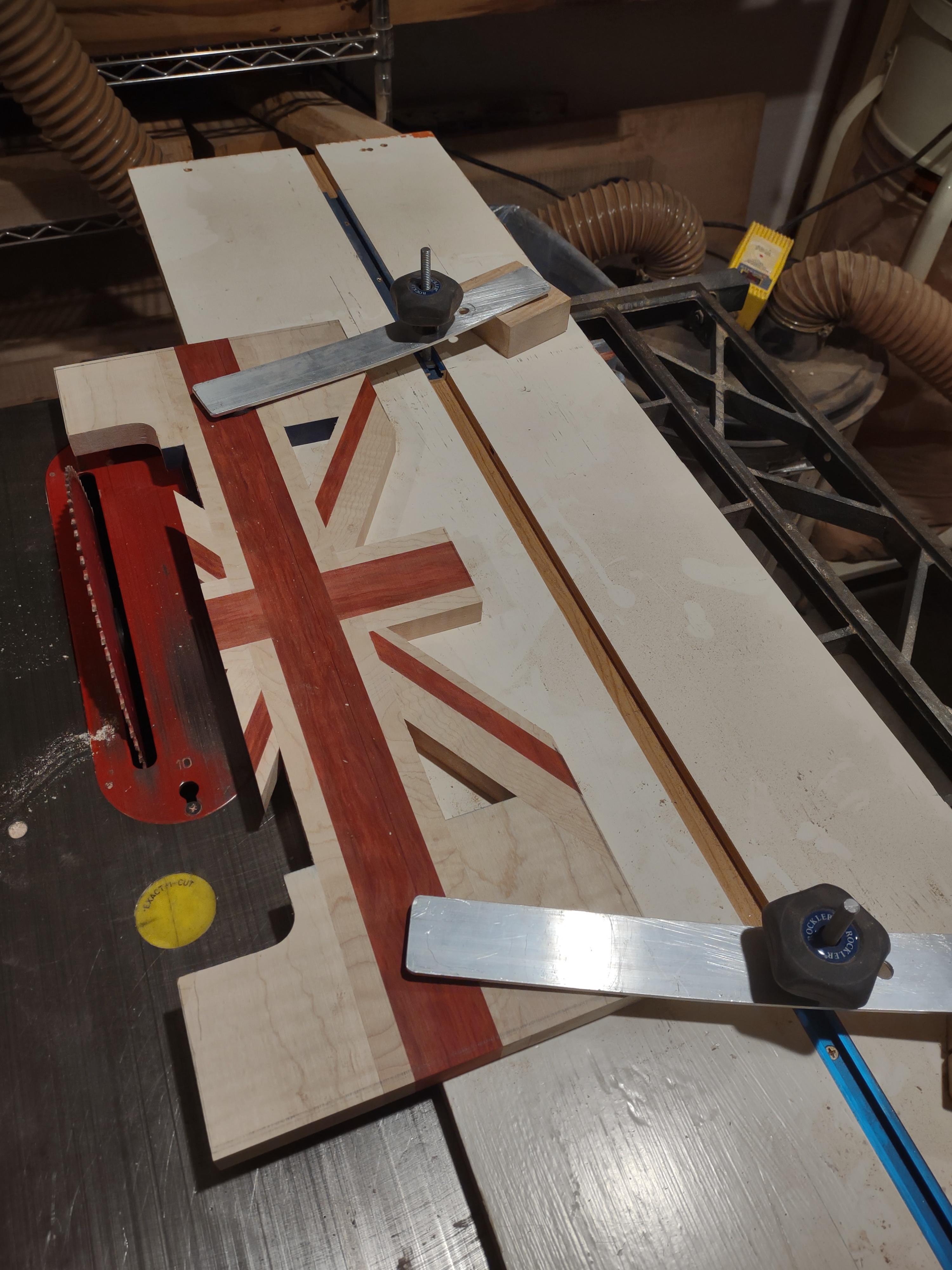 I cut and milled with width the maple piping which I typically attach with screws. In this instance it will make it easier to keep the piping white this way. I thought about red piping or blue piping but realized that white is the only one that borders both - so white it is! 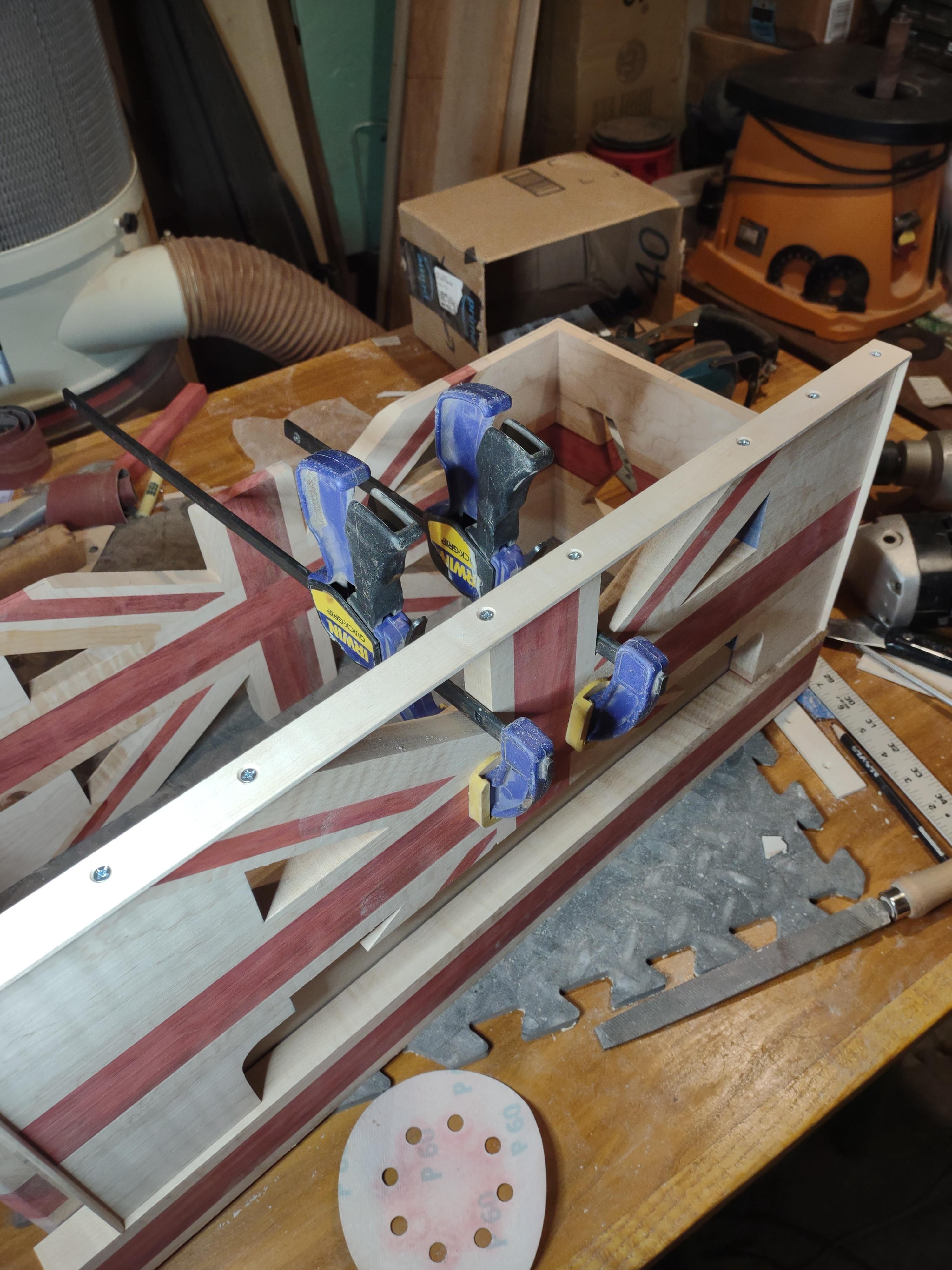 Face plate posed tor glamour shot. I plan to use small steel brackets and neodymium magnets to hold it to the chassis. 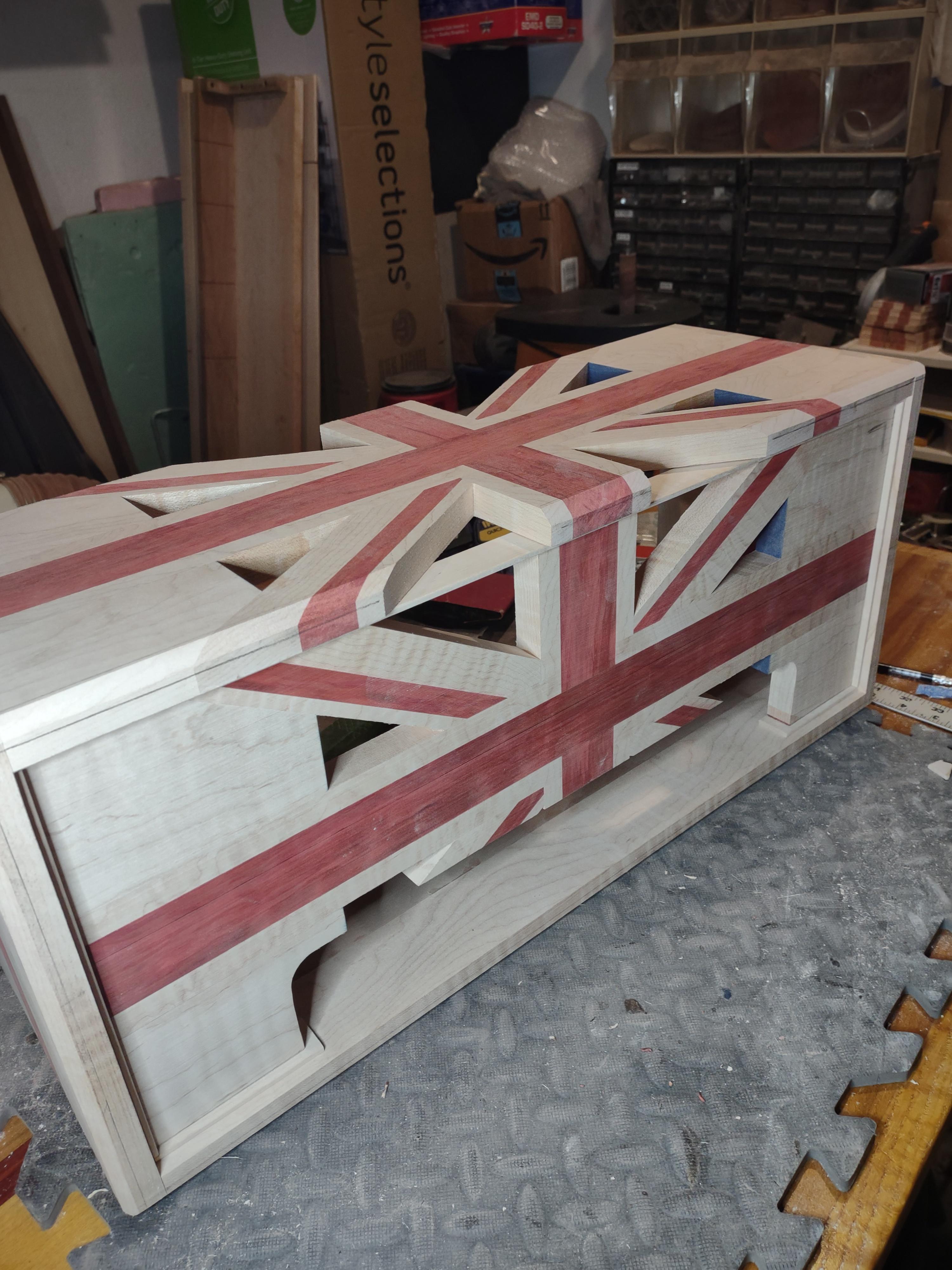 I originally planned to trim the piping where it intersects the flag stripes but after looking at it I like the demarcation it presents. 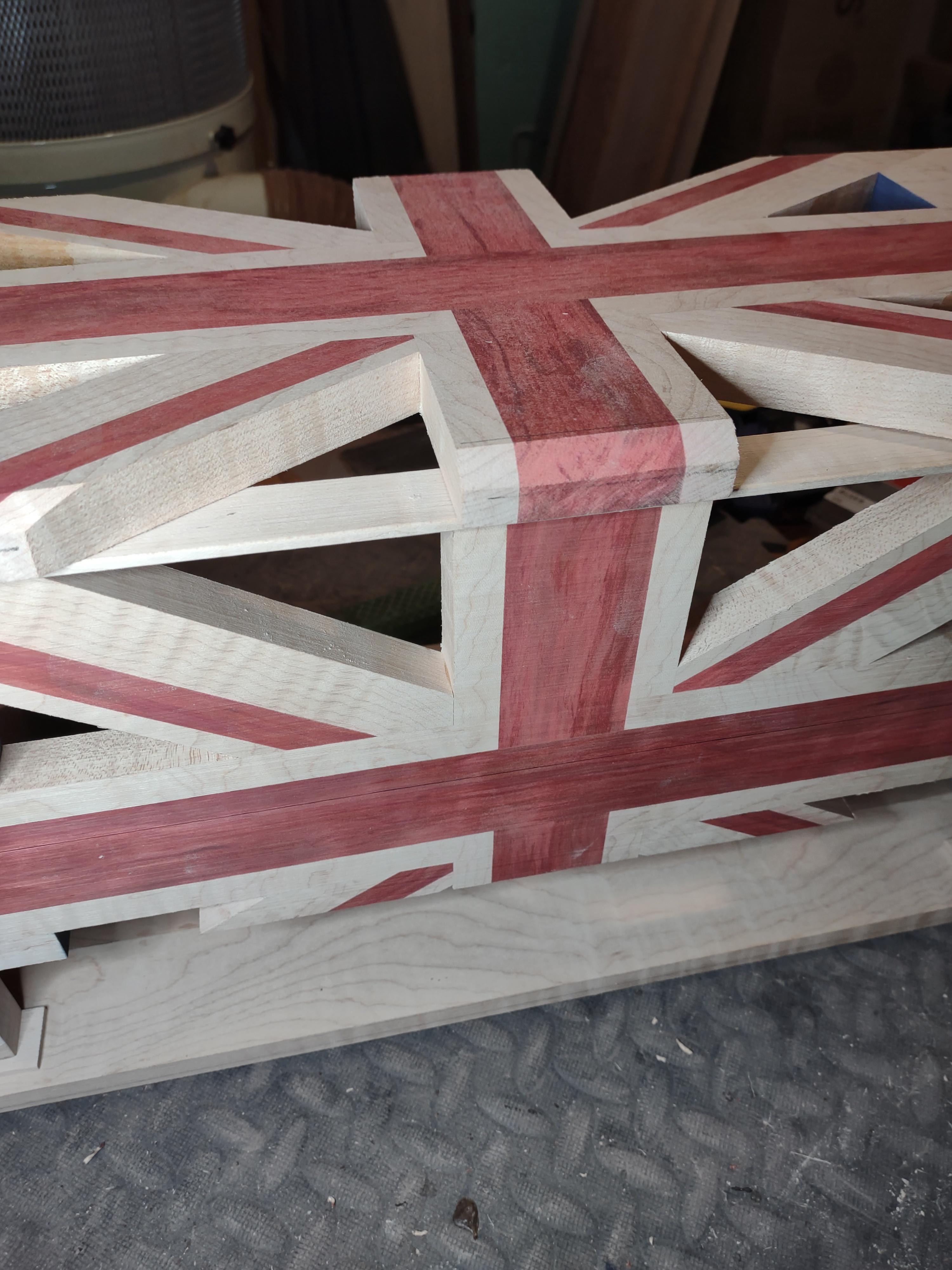 Yes - white "piping".
Looks wicked awesome, I can't wait for the blue to return...
I may have missed it if you mentioned earlier, but what's going in it?

I love it! Great idea, and amazing work. Thanks again for the detailed pictures, it's a real pleasure to follow. The front looks great with the piping.