Download link first, for those who'd rather skip the essay.

I know speaker IRs are hardly in short supply, but I've finally managed to get together a pair of T1281s, i.e. 55hz 16 Ohm G12H30 Greenbacks, and thought it would be a good opportunity to record some of my own. Two speakers might not be as good as four, but it does mean you at least get "acoustic coupling" (Johan has a great video on this!)

Here they are, in situ: 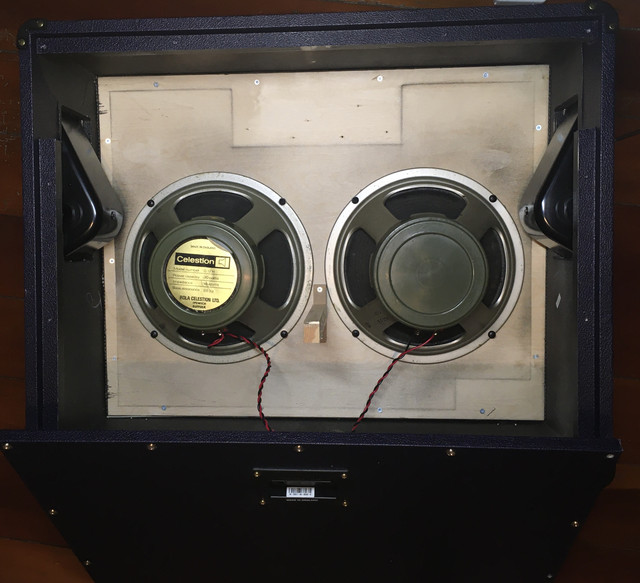 As it turns out, making IRs was easier than expected. I used Logic's IR Utility (cleverly hidden inside Space Designer), and the Ownhammer GNR IRs as a reference. After capturing 1s responses via 10s sine sweeps, I trimmed and phase-aligned the deconvolved IRs in Logic by hand (I imagine Ownhammer have a more precise automated method).

As far as equipment, I used the return FX loop in my TAE (which has a very neutral SS poweramp) to send the signal to the speakers. Recording was done via an SM57, with a slightly unconventional larger grill as I misplaced the original somewhere (shouldn't make a difference with the "sine sweep" method). I used my UAD Apollo for tracking, with the Neve 1073 "unison" preamp (EQ section off) and no additional processing.

You can see all that gear here (not the tidiest space - or the most acoustically-refined - but probably good enough for a close mic'ed guitar cab): 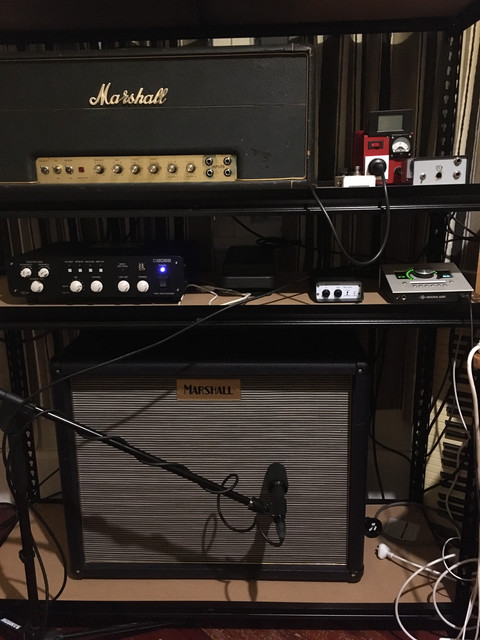 I ended up with 4 IRs, each of them 24 bits, 96khz and 200ms long. The placement is less precise. I used the standard technique of looping a signal through the speakers, while moving the mic and listening on closed-back cans turned up loud to find the good spots. There are two positions for each speaker, one on-axis and the other off - vaguely near the center of the respective speaker in each case. Both speakers were playing at all times.

I've also made a comparison clip, although I suspect most will get a better idea simply loading the IRs into their existing setups. It's just a couple of variations on a simple riff, Rickenbacker into JTM 45/100 clone. I've labelled each of the transitions. The Ownhammer example chosen was the closest comparison I could find (modern SM57, on "sweet spot", no EQ processing) - note that the speaker used here was a '71 T1221 (so 25W, 75hz).

Doubt I'll be going into commercial IR production any time soon, but it was a fun experiment, and now I have some new sounds for my home recordings! Enjoy
A

Thanks for sharing, I'll check these out.

Cheers , got to check it out !
You must log in or register to reply here.

M
Line Out contains what ? Then into IR?